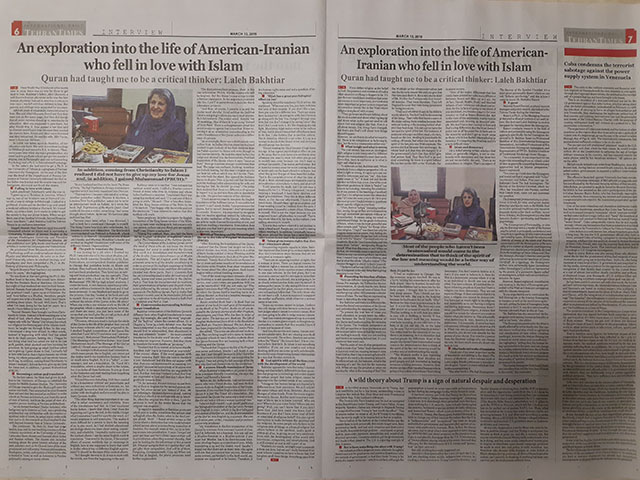 TEHRAN — Laleh Bakhtiar, an Iranian-American Islamic scholar, is the first woman to present a critical translation of the Quran in any language.

Dr. Bakhtiar has a B.A. in History from Chatham College in Pennsylvania, an M.A. in Philosophy, an M.A. in Counseling Psychology and a Ph.D. in Educational Psychology. She is a certified psychotherapist and has been practicing Islam for over 60 years.

She is the author of many books on Islamic unity, architecture, psychology, psychoethics, and moral healing through the Erfan Enneagram and the 99 Most Beautiful Names of God. Dr. Bakhtiar has translated over 30 books on Islam and Islamic beliefs into English. Her vocation as a practicing Muslim, psychologist, book publisher, and editor and scholar gives her an indispensable role in the Muslim community.

Born on July 29, 1938 in Tehran, she was taken to the U.S. by her American mother, Helen Jeffreys. Helen was the first American to marry an Iranian and migrate to Iran (1931) as well as the first American trained nurse in Iran. Helen traveled with Laleh when she was six months old with her two older sisters, who had been born in America, back to America in 1939. Reza Shah (Shah of Iran from 1925 to 1941) at that time was siding with the Germans. The American Embassy wrote to the few Americans who were in Iran that they needed to leave the country because it wasn’t safe for them.

Once World War II broke out a few months later in 1939, there was no way for them to get back to Iran. Bakhtiar’s father, Abol Ghassem, a well-known Iranian physician as he was the first Iranian physician trained in America to return to Iran (1931), was left with four children in Iran. Her parents and siblings were separated for six years.

After six years of separation, Helen returned to Iran. She and Abol Ghassem found out that they were not on the same page, but they did decide that all seven children should go to America for an education. Abol was supposed to join them, but after World War II, Iran passed a law that said no doctors could leave Iran because they needed the doctors here. Helen and Abol were divorced and Abol remarried. He and his wife, Bibi Turon, were to have ten children.

As Laleh was taken again to America, all her education was there. She went to a woman’s college in Pittsburgh and earned a B.A. in history. Then, many years later when she was a grandmother, she went back to graduate school and got two master’s degree, one in Philosophy and one in Counseling Psychology and a Ph.D. in Educational Psychology.

Falling in love with Islam

Laleh practiced Christianity until she was 19.

“I grew up as a Christian in America. When I was 19, one of my brothers was at Harvard University. I was in college in Pittsburgh. I talked to a girlfriend of mine and we decided to go and spend a weekend with my brother at Harvard. We ironed shirts, 25 cents a shirt, for 6 weeks in order to get the money to buy our plane tickets. When we got there, one of my brother’s friends, Seyyed Hossein Nasr, was there,” Laleh Bakhtiar told the Tehran Times in an exclusive interview.

Seyyed Hossein Nasr (born in 1933) is a world-renowned scholar on Islam and is currently a University Professor of Islamic Studies at the George Washington University and President of the Foundation for Traditional Studies. He has published over fifty books and hundreds of articles in numerous languages and translations.

He graduated from Massachusetts Institute of Technology with an undergraduate degree in Physics and Mathematics. He went on to Harvard University where he studied Geology and Geophysics and then completed a Ph.D. in the History of Science and Philosophy.

“Seyyed Hossein Nasr has been my mentor for about 60 years,” she highlighted.

“He was there at Harvard getting his Ph.D. His mother lived in the area. She would have dinner for the few Persians there at that time. On Saturday night of that weekend we went to their house. Seyyed Hossein Nasr asked me: What religion do you practice? I said: I grew up as a Christian. He said: Your father is a Muslim, therefore, people will expect you to be a Muslim. I said: I don’t know anything about Islam.  He said: Well, learn. That’s what I’ve been doing for the last 60 years. As a result, I have fallen in love with it.”

“Seyyed Hossein Nasr brought me from Christianity to Islam. Instead of first teaching me to be afraid of God, which often happens if a teacher begins only with the “Sharia” (the Islamic law which is a religious law forming part of the Islamic tradition), he taught me through Erfan. In this way, I developed a deep love of God. In other words, instead of beginning with what God has asked me to do (daily prayers, fasting, etc.), I began by not doing what God has asked me not to do (eat pork, gamble, drink  alcohol) and then learning the practices. By first giving up what God has asked me to give up, I grew closer to God. I actually fall in love with God so that religion became my whole being, my whole personality and my whole reason for living. In addition, coming from Christianity to Islam I realized I did not have to give up my love for Jesus and, in addition, I gained Muhammad (PBUH).”